Why pray when God decides everything? 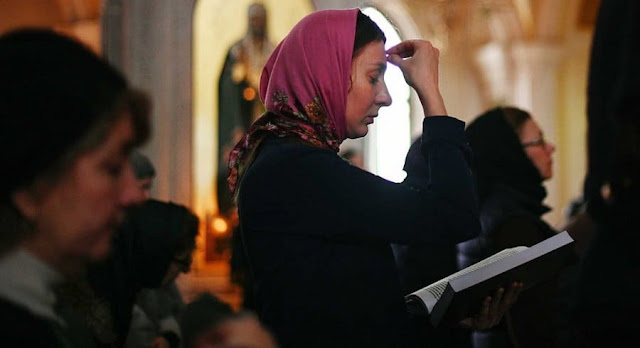 Why pray when God decides everything?

I strongly, purely prayed for the recovery of a person close to me, but it did not help. It turns out that nothing depends on our prayer?Metropolitan Hilarion (Alfeyev) answers the reader's question:

It's the same with prayer. This is the fellowship of a Christian with God, and prayer itself brings joy, regardless of what we can receive from God in answer to this prayer.

Second: God hears all our prayers, but God does not always answer the way we want. Children often ask their parents for something that the parents cannot or do not want to give them. Children are offended, naughty, but parents insist on their own. God's love for us is parental love. The Lord cares about us, and He knows better than we what we need.

Third: if we want to receive something from God, we should not be ashamed to ask for it. The Lord Jesus Christ has a wonderful parable about the annoying widow. She went to the judge and asked to resolve some case, but the judge was not interested in this widow, because she had nothing to pay. He refused her for a long time. But since she was constantly walking, constantly knocking on his door, he said: since she is so persistent, I will still fulfill her request.

Why did the Lord speak this parable? He certainly does not compare God to an unrighteous judge. But He says: even if an unrighteous judge responds to a request that has been expressed many times, how then will the Lord not hear His children who diligently pray to Him?
Posted by Susanna Schneider No comments: 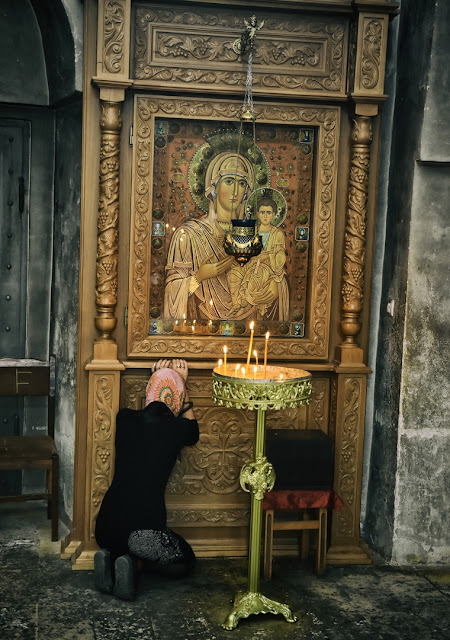 He who loves conversation with Christ loves to be alone. He who loves to be in the company of many is a friend of this world. If you love repentance, then love silence, for without silence there is no perfect repentance.

Monastery of St. Seraphim of Sarov in Greece 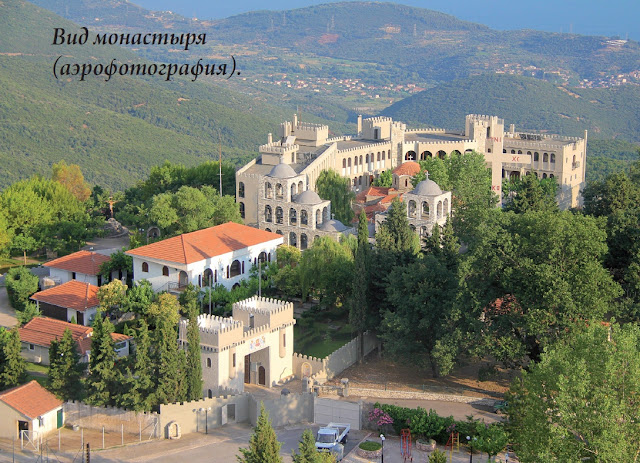 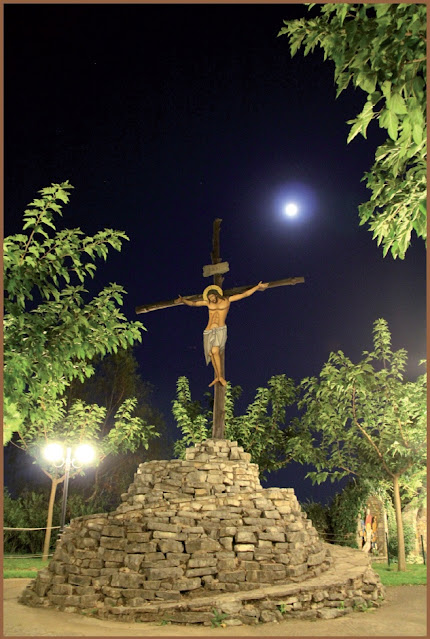 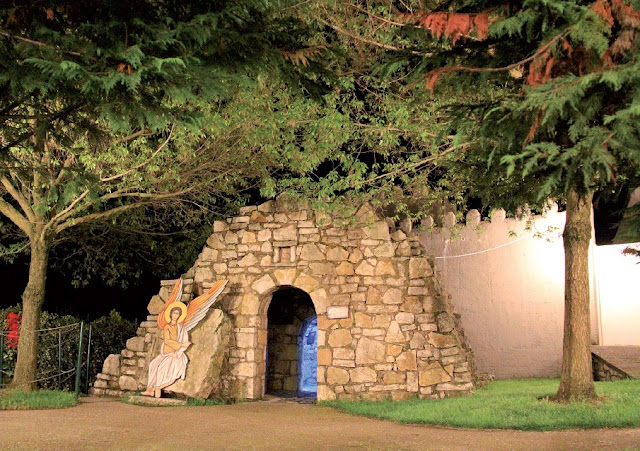 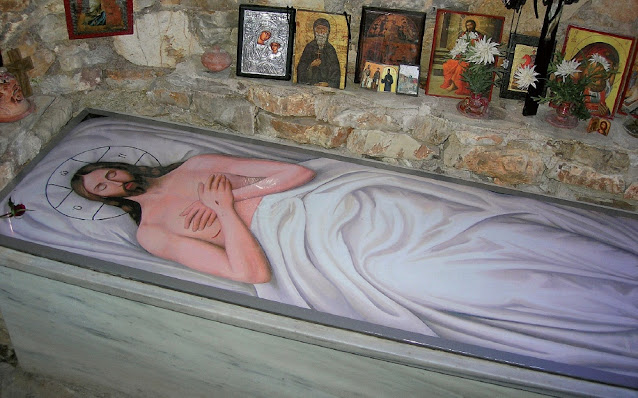 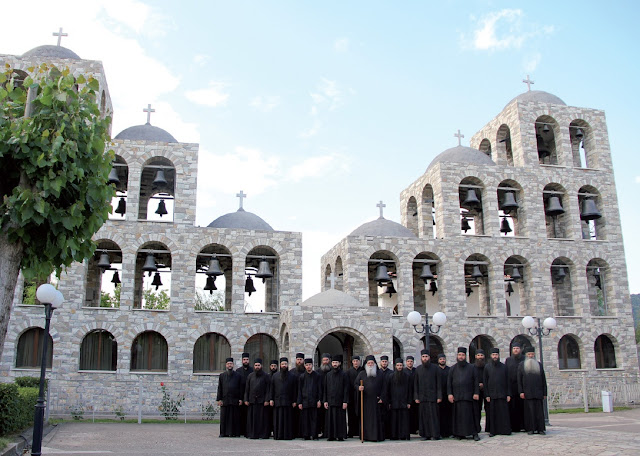 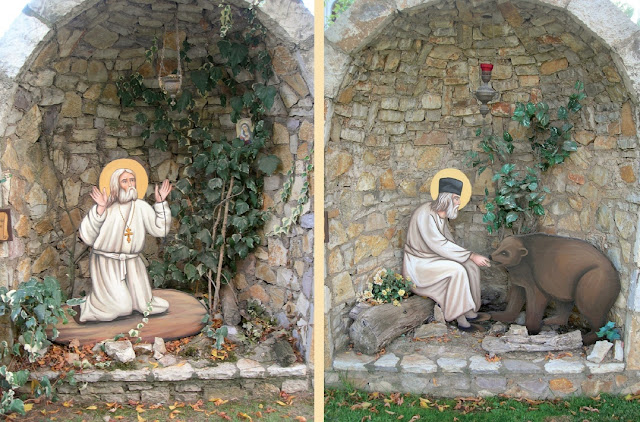 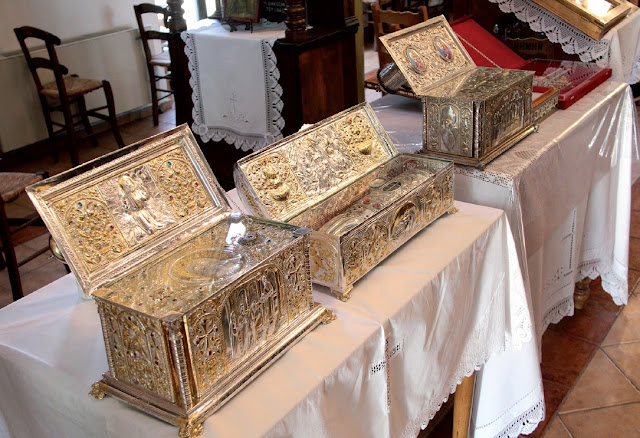 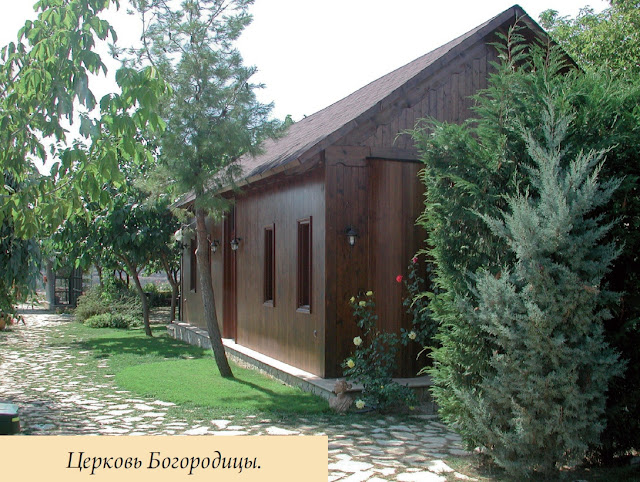 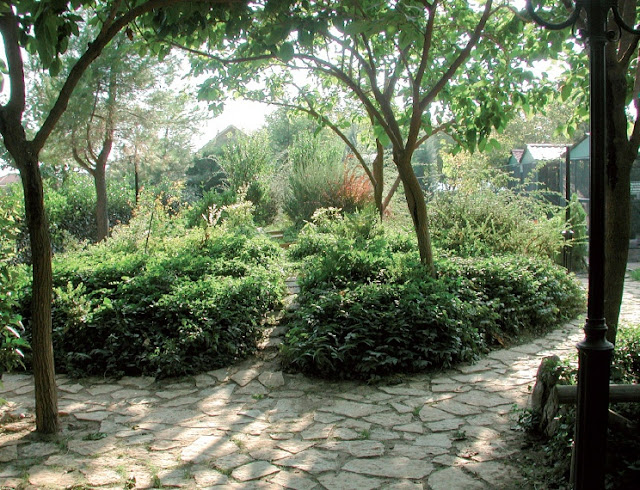 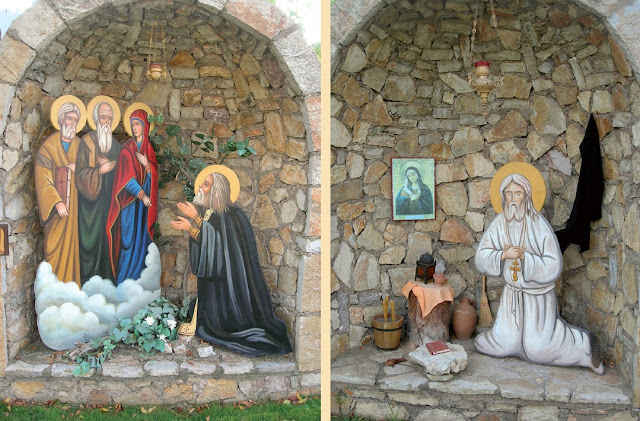 The Monastery of St. Seraphim of Sarov is located in Trikorpho in Phocis. It was built in 1984 by Abbot Nectarios Mulatiotis and Archimandrite Augustine of Syros.
A certain light descended from heaven every year on July 19 to a small Golgotha, built in the monastery by Abbot Nectarios and spread over the cross and the image of the crucified Christ.This light came from heaven day and night, illuminating everything around, which many witnessed.
At this place, Saint Seraphim of Sarov began to appear and walk around the Golgotha ​​of the monastery, as well as approach a copy of the tomb of our Lord.
Where Saint Seraphim passed, the monks arranged proskinitarians with scenes from the life of the saint, from his birth to his repose. Since then, the believers began to break off pieces of the cross, because miracles began to happen from it.
Today, the monastery is home to about 20 monks who have received spiritual education in various regions of Greece and abroad. The abbot of the monks to this day is Father Nektarios, who built the monastery of St. Seraphim from scratch. Before the foundation of the monastery, there were only fields and abandoned vineyards.
Father Nektarios also built the cathedral of the monastery with a bell tower, which is the largest in the world: it can hold 62 bells and 400 chimes.
Electronic bells play the various melodies of the church troparia. Father Nektarios, together with his monks, also organizes a church camp, to which children from poor families come in summer to spend several days of recreation in nature, near the monastery walls. Between 300 and 400 children arrive and are accommodated at the camp every summer.
The monks planted a beautiful grove and called it the “Fence of the Mother of God”, because inside it there is a church in honor of the Mother of God. Outside this wooden church, there is a marble baptismal font similar to the early Christian ones in the shape of a cross, in which babies are baptized, as well as everyone who wants to become Orthodox Christians.
The blessing of God is clearly present at the monastery of St. Seraphim. Father Nektarios created and built it exclusively with funds donated by benefactors and ordinary believers. He never took money from the state, Europe or any organization.
The grace of God rests on this monastery, therefore Saint Seraphim performs many miracles here when he appears and, wherever he appears, he calls this particular monastery: "This is my home", "Come here, I live in Tricorfo, come here to worship" Many pilgrims come from all over Greece, as well as from Russia, America and Europe, to venerate the relics of Saint Seraphim of Sarov, Saint Augustine and his mother, Saint Monica, as well as the holy relics of our great Orthodox saints, such as a particle of the right hand of Saint John the Baptist. baptizing our Lord, Saint Nicholas, Saint Barbara, Saint Ephraim, Saint Anna, Mother of the Theotokos, Saint George, Saint Demetrius, Saint John Chrysostom, and many other holy relics that are kept in the cathedral of the monastery.
In the monastery there is also a particle of the Honorable Life-giving Cross, on which our Christ was crucified and many miracles are performed from it. The sick are healed, and some barren women, whom Father Nektarios baptized with the Honest and Life-giving Cross, found children and became mothers.
We must also mention the holy water of the monastery. This is the water of St. Nicholas. From 1984 to July 19, 2007, there was no water in the monastery. Father Nektarios and the monks collected rainwater in winter in a large reservoir and used it economically throughout the year. More than once they had to bring water by special transport from Nafpaktos.
On the territory of the monastery, five attempts were made to drill wells without any result.
One modest believing woman named Catherine from Constantinople gave the monastery a miraculous icon of St. Nicholas the Wonderworker. Father Nektarios placed the icon in the iconostasis of the monastery cathedral. The next day Saint Nicholas, in full bishop's vestments and with a pastoral staff, appeared in a dream to one believer named Nicholas, who lived in Athens and said to him:
“Nikolaos, I am Saint Nicholas. Go to the monastery of Father Nektarios and tell him the following: I am glad that he honored me by placing me in the iconostasis of the church. For this I will give the water of the monastery, which is deprived of it. Tell him to take his pastoral staff, go behind the altar of the temple and show the exact place, hit the ground there with the staff three times, in the name of the Father and the Son and the Holy Spirit, and then my water will appear from there, which will be holy water for believers. "
Father Nektarios did exactly as ordered. And the drill hit the indicated place on July 19, 2007, on the day of the feast of St. Seraphim, and when the icon of the matchmaker was carried nearby, the water of St. Nicholas gushed out of the well. Since then, the monastery has abundant water, and the believers take holy water and are healed of various diseases.
This is a brief history of the monastery of St. Seraphim of Sarov in Greece. Today it is the only monastery in this country bearing the name of Saint Seraphim.
Of course, there are churches and chapels in other places as well. But there has never been such a monastery.

Email ThisBlogThis!Share to TwitterShare to FacebookShare to Pinterest
Labels: Monastery

There are always people in life through whom God loves you ... 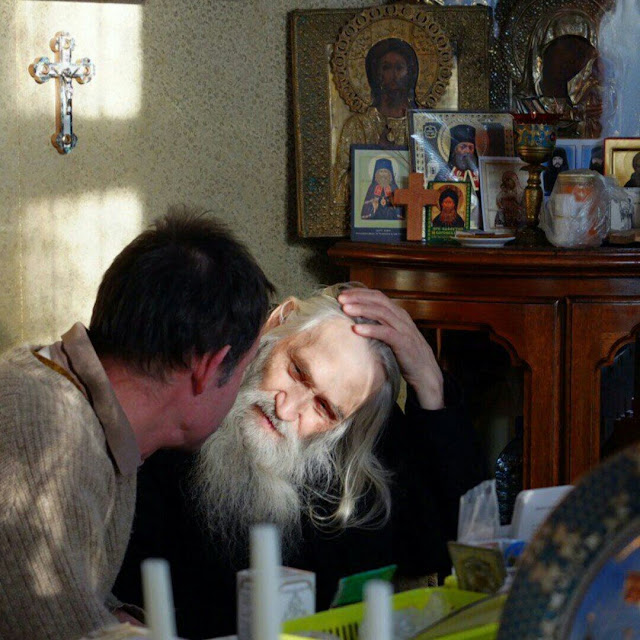 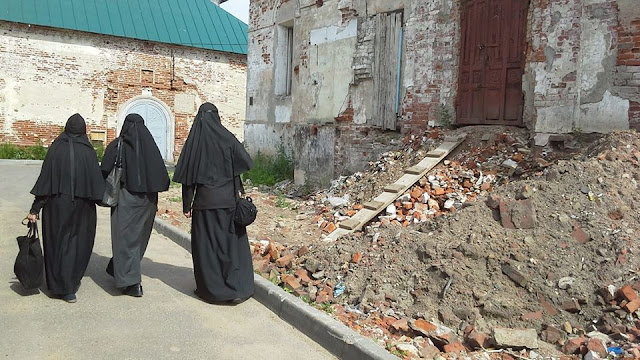 Once the elder of the monastery of Optina Joseph was walking in the forest and he was told that there were also isolated in the forest. The elder said:
This is a dangerous path of loneliness, passions grow, but in humans it is not useful. Look, where people walk, on the road, there the grass does not grow and where they do not walk, there it is thick. It does us good when we are pressured. The tree that the wind shakes the most, strengthens its roots more and this in silence, then falls immediately down.
Posted by Susanna Schneider No comments: 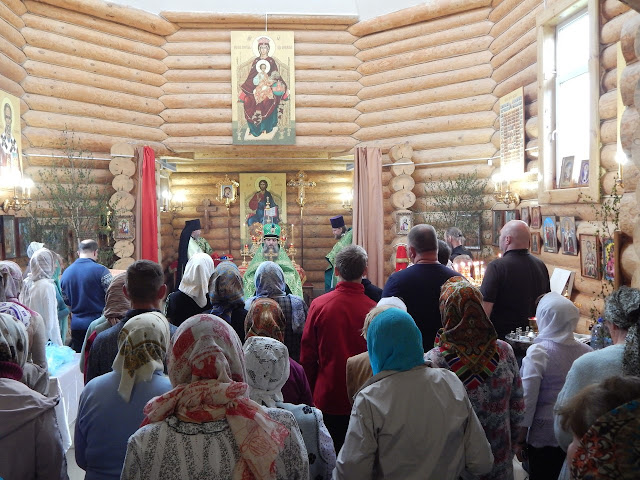 Until 1956, by God's permission, I suffered from a disease of the nervous system, which did not respond to medical and medical treatment (according to the popular saying, there was damage in me). But by the grace of God, the Mother of God turned her gaze to my sufferings and pointed out the monastery where the elder doctor lived (through a photo of the elder Simeon). I did not go to church at all and was not interested in anything spiritual. Having learned from one woman, who showed me a photograph of Father Simeon, his address, I quickly agreed to go to him in Pechory, not considering him a spiritual doctor, but considering him an ordinary doctor helping patients.
I had no idea either about faith, or about worship, or about fasting and sacred ordinances, I had no religious feelings. Everything was completely closed and incomprehensible and uninteresting to me. Arriving at the monastery towards the end of the service, I immediately went to the elder, as to an ordinary doctor, and began to tell him that I was corrupted. Father gave me a cross to kiss and said: “How do you know that this is damage!”. Then I began to vomit and I felt sick, and inside me someone was screaming, and then I don’t remember what happened to me. I vomited, and the people who were with the priest began to look after me, took out pots with vomit, which was like greenery. Afterwards it became easier for me, and when I received the Holy Mysteries in the morning, I felt brighter and more joyful.
Without the prayer of Father Simeon, I would not have entered the church, the opposition tormented me. At home, before leaving for Pechory, I took a rope to hang myself. But the Mother of God did not allow me to commit suicide, but sent me kind people who directed me to the elder. I lived in the monastery for about a month, and how joyful it was for me and my friends who looked after me during my illness, in whose sight I was healed. Since then, I constantly visit the monastery and thank the Mother of God and the Lord Jesus Christ for the love of our father Simeon.
Posted by Susanna Schneider No comments:

Email ThisBlogThis!Share to TwitterShare to FacebookShare to Pinterest
Labels: Orthodox Parables and Stories

The Elders of Mount Athos 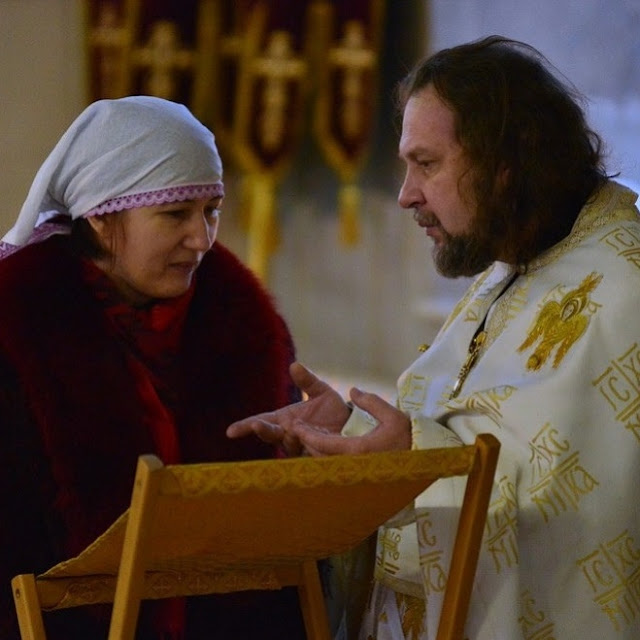 Confess, receive communion and fear nothing. Confession is the key to the Kingdom of Heaven. - The Elders of Mount Athos